A few days ago, while travelling through the small sea-side village of Huskisson in Jervis Bay, I noticed that somebody had covered parts of the local petrol station in colourful knitting. It reminded me of other yarn bombing projects I have seen over the years, such as the Queanbeyan bridge that was 'yarn-bombed' last year, or the 'yellow submarine' project in 2014 that covered the retired HMAS Otway in yellow knitted fabric (Image from: The Daily Advertiser)

Yarn bombing projects have been spotted around the world: From an army tank in
Dresden that was covered in 'knitted graffiti' to knitted bikes (image below from Wikipedia), bridges covered in yarn and public art that is kept warm by extra knit-wear. 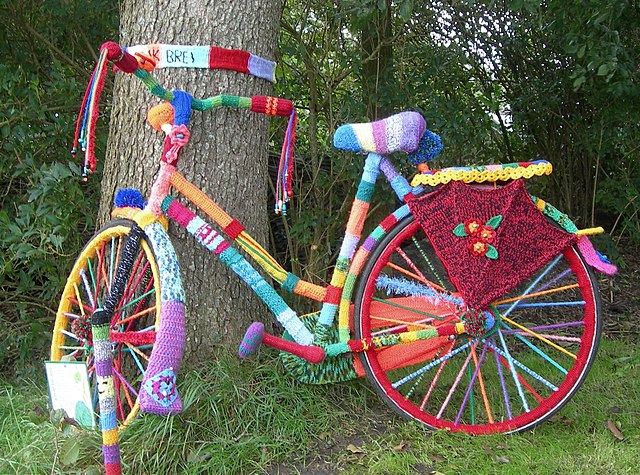 But what exactly is yarn bombing and where did it come from?

It all started with a very simple idea: Magda Sayeg, from Houston, Texas, decided to cover her door handle with knitting. This inspired her to take her knitting outdoors to public installations such as sign posts or bollards. The idea quickly took off, as she explains in this wonderful TED video: