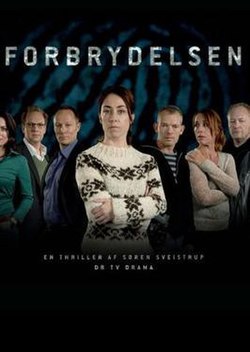 The internationally acclaimed Danish TV series 'The Killing' became a big hit in the late 2000s. First aired in Denmark in 2007, it was later shown by TV channels around the world. Australia was first introduced to Detective Inspector Sarah Lund (played by Sofie Gråbøl) in 2011 when the show was broadcast by SBS1. A US remake was produced by American cable network AMC in 2011.

The original series is set in the Danish city of Copenhagen. Typically, crime drama series will devote one or sometimes two episodes to the investigation of one case, but in 'The Killing', the investigation is extended out over the whole season, with each fifty-minute episode covering one full day of the investigation.

The on air crime drama was later followed by real life court drama, when Faroese based company 'Gundrun & Gundrun', the designers for Sarah Lund's original sweater with the iconic black and white snowflake pattern (as seen in the movie poster above), took Danish company 'Stof go Sy' to court over their similar 'knit-your-own' version and lost. Which is great news for any keen knitter out there who would like to create her own Sarah Lund jumper!

Keen to knit your own Sarah Lund jumper? Use an Aran weight yarn such as Marks & Katten EcoUll for an authentic Scandinavian look.

Various versions of the Snowflake sweater pattern are now available. My favourite is the version by blogger Mikal Ann, who translated an original Danish pattern into English.

A pattern for the red jumper (image below) worn by Sarah Lund in season two was published by Radio Times in 2011.